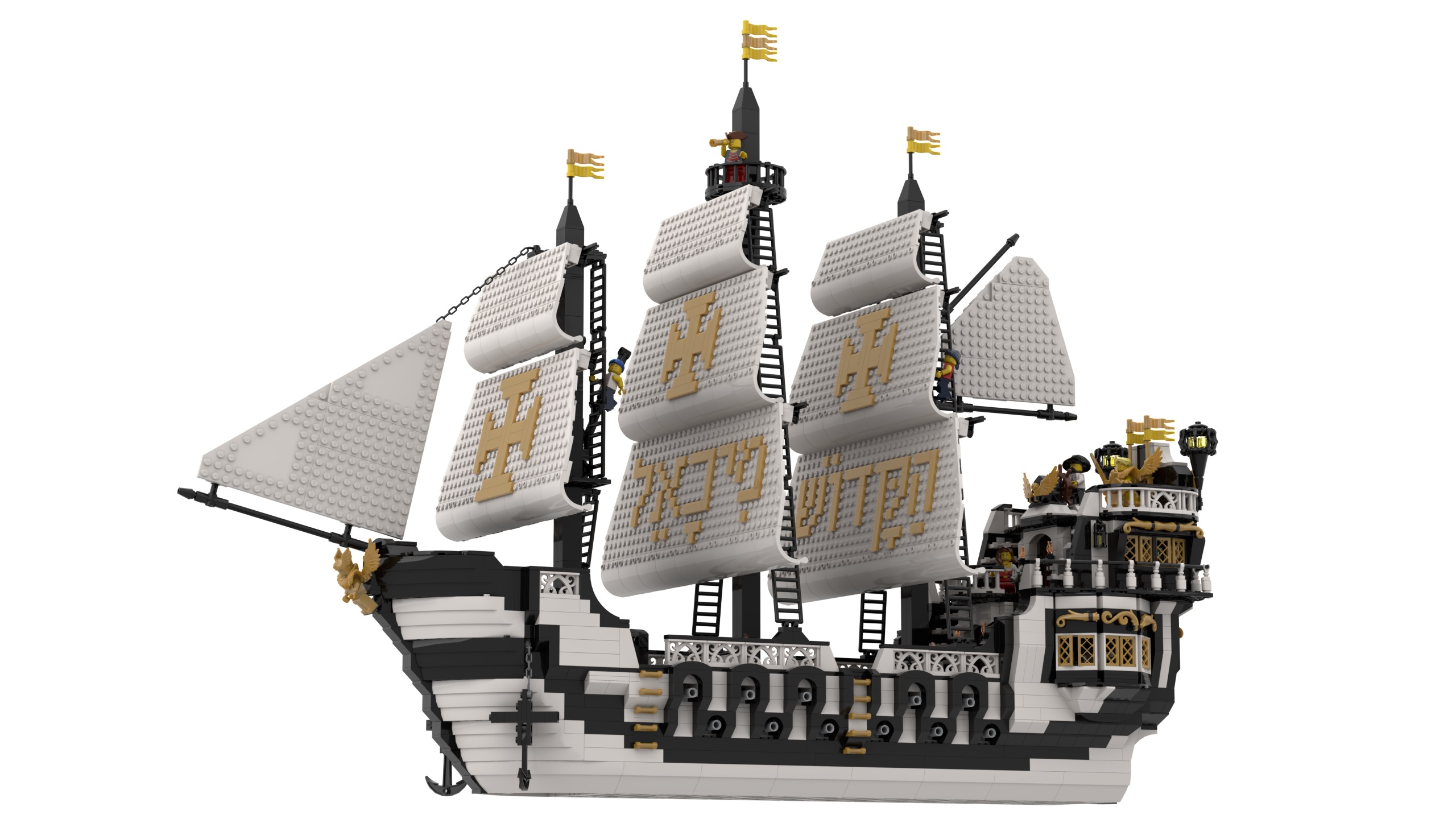 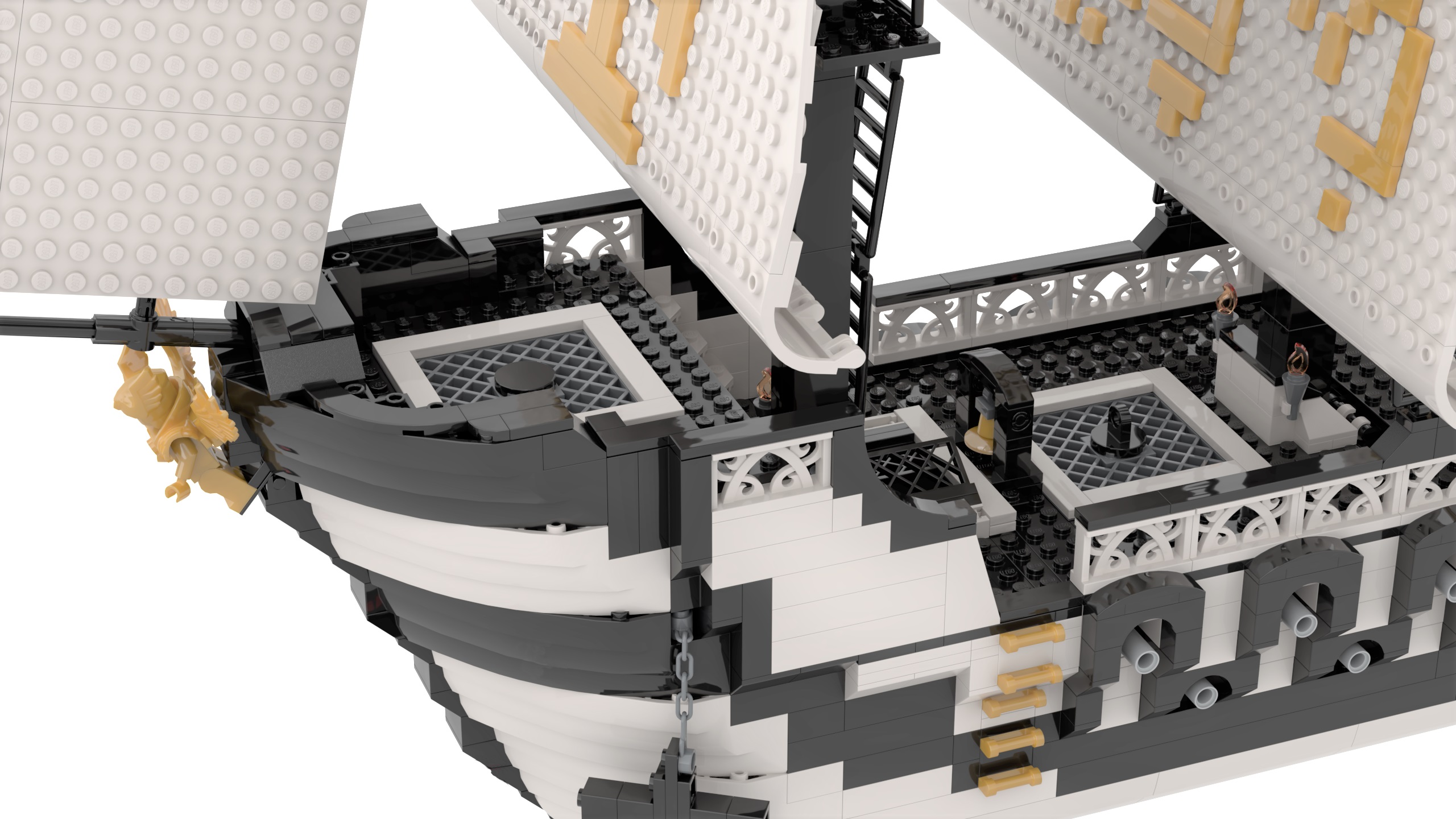 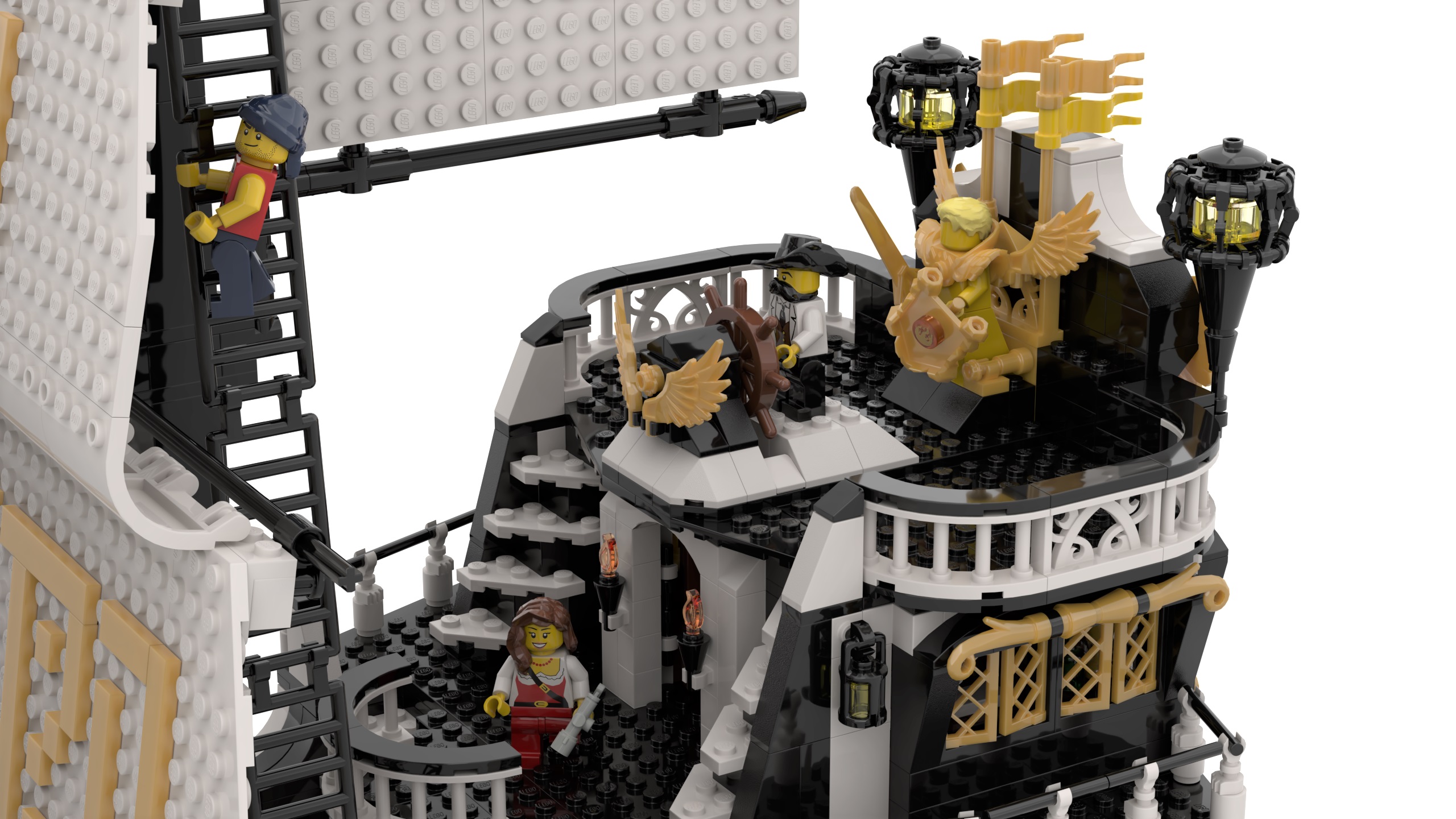 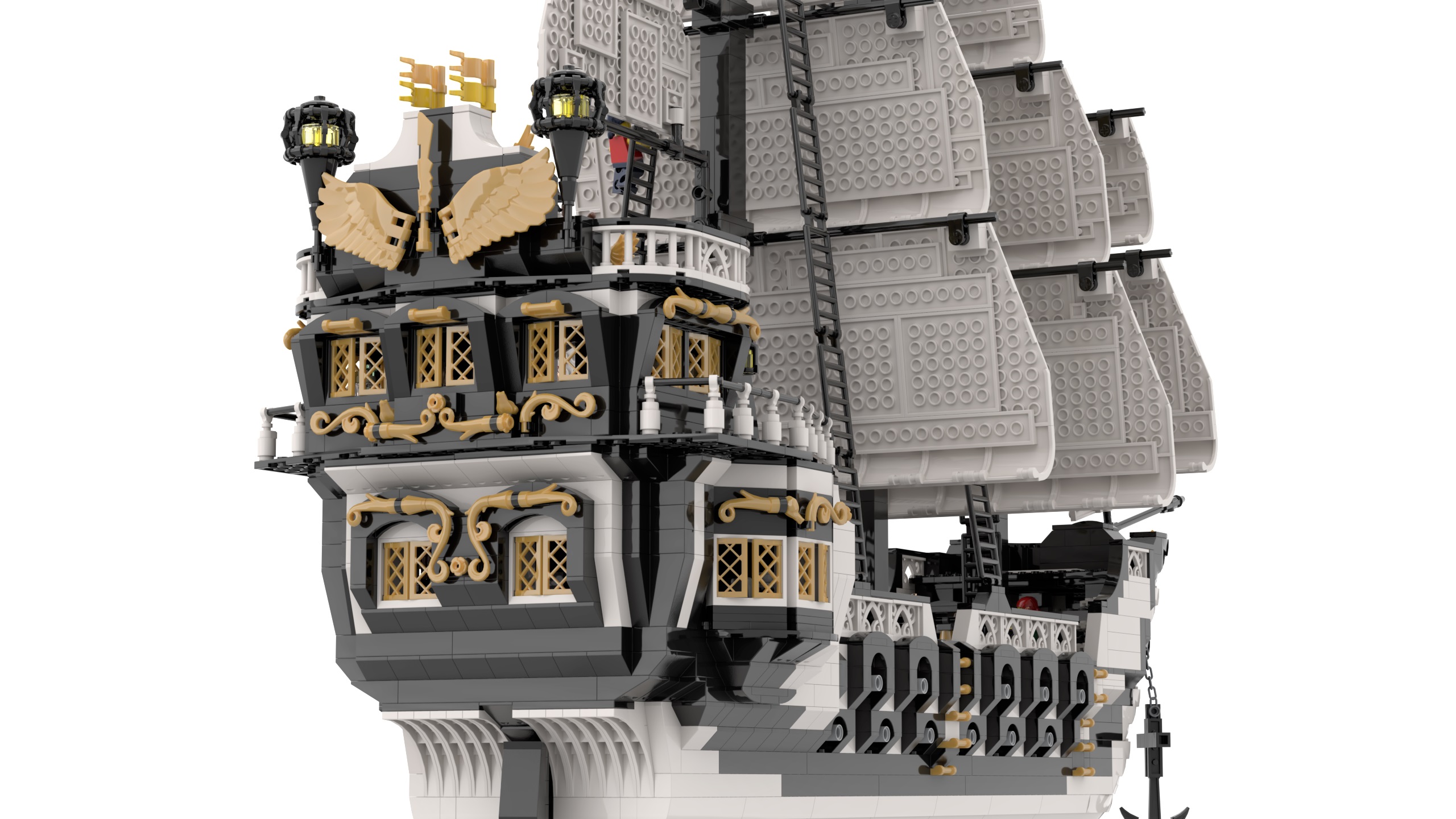 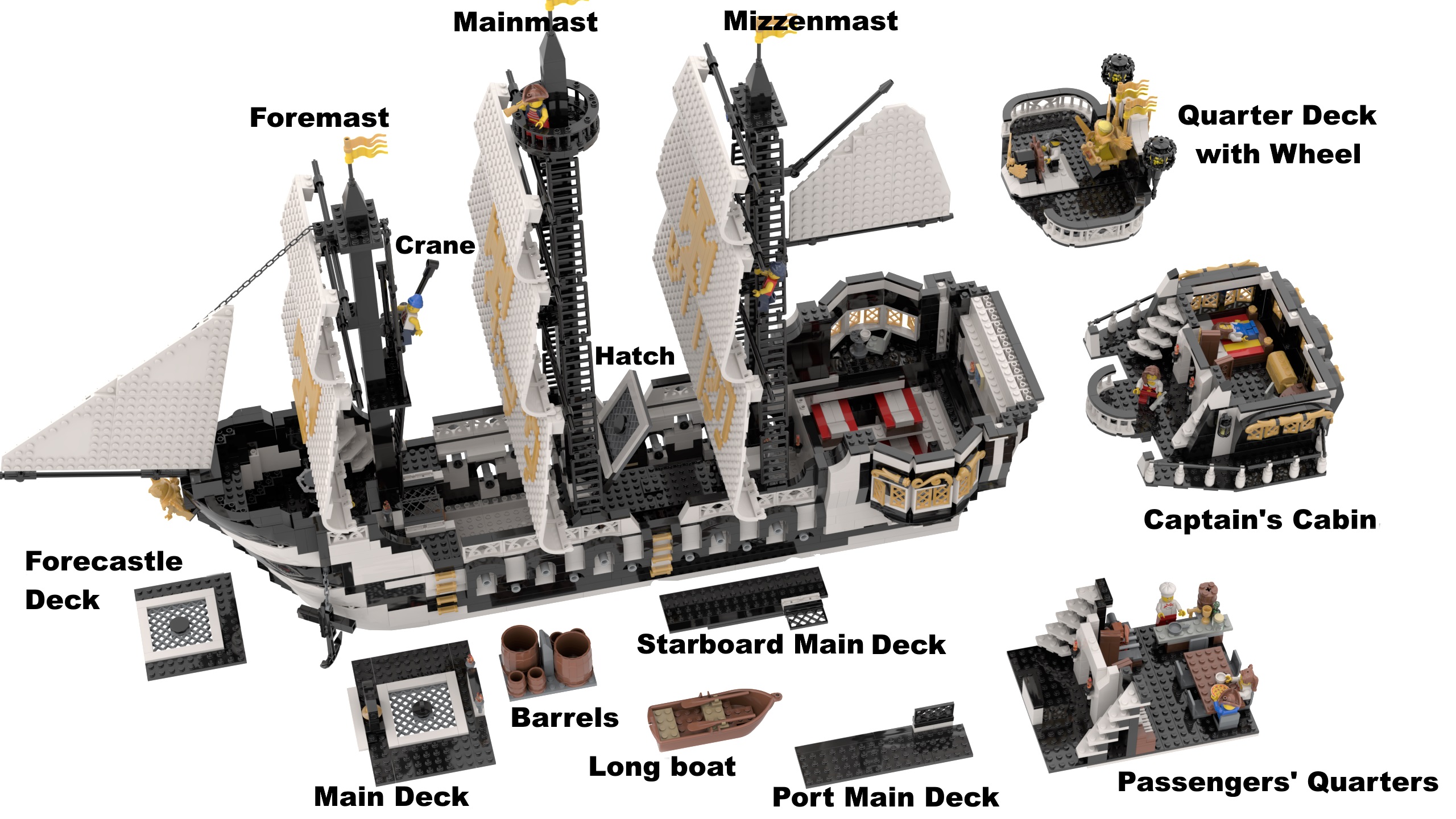 The Modular Build: This ship is designed with the inspiration of a galleon and full-rigged ships. It is designed in white, black and gold colors to create a luxurious look. The St. Michael’s Galleon is a modular build, using the classical building technique. The following 10 sections can be easily modularly removed and reattached/placed (resting on tiles) for easy play: forecastle deck, main deck (in 3 various parts), cargo hold barrels (lifted out by crane system located on foremast), main deck hatch opens on hinge (above long boat), long boat, quarter deck with wheel, captain’s cabin with navigation and balcony, and the passengers’ quarters.

This is a three-masted vessel with a bowsprit on the forecastle holding up the figurehead of a golden archangel. The vessel’s sails comprise of a large single jib sail fore-and-aft rigged on the bowsprit, square-rigged on the foremast, mainmast, and mizzenmast respectfully, and a spanker sail gaff-rigged on the mizzenmast. The masts are fully equipped with plate sails, as inspired by LEGO CREATOR set 31109. If desired, the plate sails can be easily removed and fabric sails can be applied. With the plate sails removed, a docked ship effect is created. The fore-mast and mizzenmast are equipped with a top platform, and the mainmast with a crow’s nest. A large golden byzantine cross decorates the foresail, main topsail and mizzen topsail. The mainsail is decorated in golden Hebrew letters with the name “Michael” (Michael) and the mizzen sail is decorated in golden Hebrew letters with the word “Kadosh” (Holy/Saint), hence describing the name of the vessel: the St. Michael’s Galleon.

Model Information: The total number of parts comes in at 2991. Some 30 parts are momentarily unavailable according to STUD.IO because of a specific color (mostly pearl gold pieces, minifigure bodies and hair). The dimensions in studs are: width 36.2, length 106.4, and height 77.9. The dimensions in Centimeters are: width 29.0, length 85.1, and height 62.3. The weight comes in at 4129.8 grams (just over 4 kg). The approximate cost as stated by STUD.IO is 1000 EURO. Actual buying options show cost (in these colors) at approximately 1300 EURO.

Impressive work, especially on the sails! 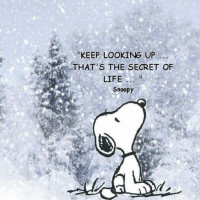