Over the vast, snowy regions that the people of the Varulev Empire call home, only the toughest of vehicles can thrive. Thankfully, the mobile artillery unit known as the Krigshund is ideal for the job.

Acting as a mobile turret to support the Wardens of Varulev, Krishund tanks move over the rough terrain with the speed of a mountain lion, and have plenty of bite to their frame as well.

Their primary cannon is the Rail Driver, a long range gun capable of firing EMP like bolts of energy that disables the vehicles of most foes, or a deadly blast of plasma should the situation grow dire.

In addition, the Krigshund has two sets of rear mountain pulse carbines, for combating infantry should it get too close, and a set of front mounted flame throwers for clearing nearby snow or enemy troops.

Though it's internal area is not designed for carrying many troops, the Krigshund comfortably carries a Driver and Gunner, who control the tank using VR technolgy and external cameras, so that the armour has no weaknesses that a crafty adversary may exploit.

The Krigshund fulfils the Armour category for Decisive Action 4.

Such a cool tank and the snow effects give it a great ambiance! 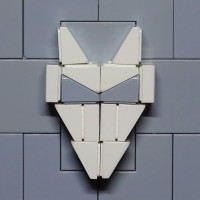 Welcome to another little corner of the Internet! I'm the Werewolff, or Wolff for short. Thanks for checking out my work and I hope that you enjoy!